Articles in this section

"A long, long time ago, there was an ancient legend that there are seven dragon balls scattered around the world. As long as you collect all seven dragon balls and recite the incantation, you can summon the dragon, no matter what you want. The wisher was fulfilled."

Well, I believe that many people in the world who love anime have seen this classic work. It was a magic story and wonderful adventure about dragon ball. Now we are going to see it in Fortnite!!

Notable Fortnite leaker ‘ShiinaBR’ tweeted that the Celebration Battle Bus will disappear on August 16, just 3 days before the release of the Dragon Ball Super: Super Hero movie. This makes sense as Epic Games have previously released cosmetic sets for Uncharted and Doctor Strange around the times their respective movies were released in theaters. Shiina claimed that we could see a Dragon Ball Battle Bus similar to the one in the Naruto crossover. Currently, this is all speculation, and we’ll be sure to update this guide as soon as the official release date is confirmed by Epic Games. 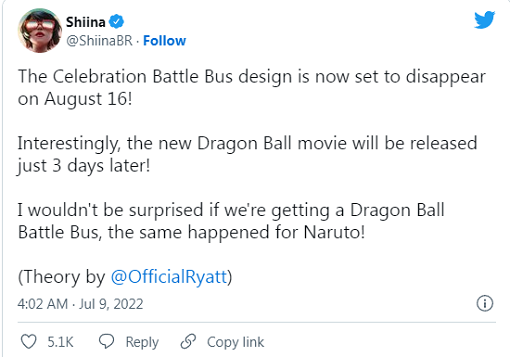 HYPEX also posted that there will be four skins about Dragon Ball Z. Let’s expect! If you search Home of Games, you can get more details about the dragon ball z quests. And this is actually going to be a super awesome event that is mainly going to be taking place inside of creative mode. It seems like the majority of Fortnite's events are inside.

It will possibly be introducing a brand new dragon ball z location because as we all know the different reality route locations this season function very very similar to the different rift zones that we had in chapter 1 season 10 where the zero point would literally open up a rift and change a point of interest to something totally different.